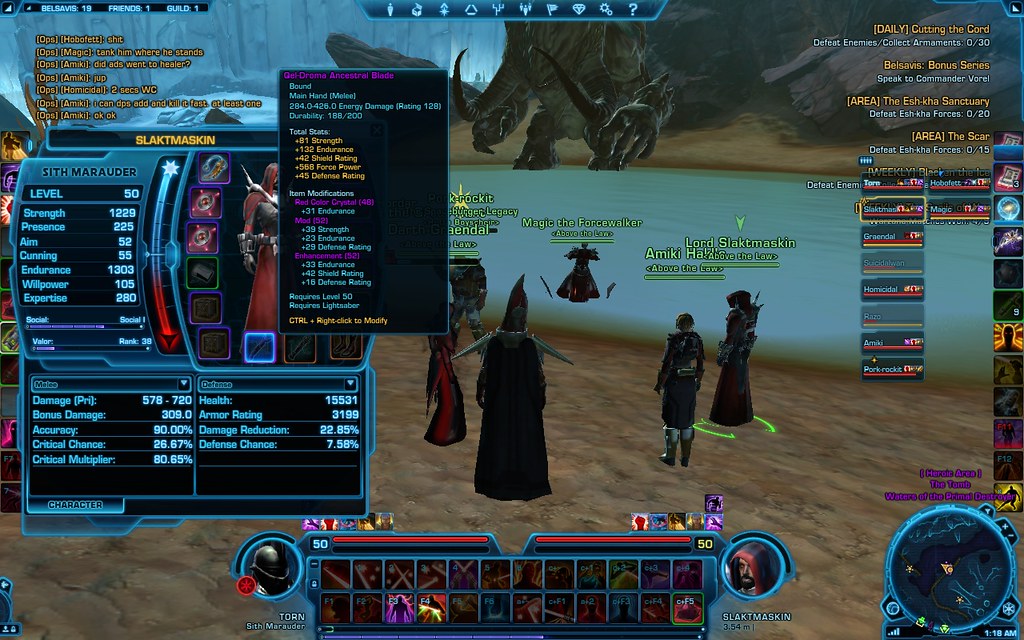 The Black Talon is the first Flashpoint available to the new Empire recruits. It is a Perfect entrance into the PvE world, optimized for a group of four above level 10, offering an enormous amount of story, some elementary and pleasantly entertaining boss tactics and an allotment of respectable loot. It is a great preschool for aspiring first time MMO gamers.
The optimal group dynamic for this Flashpoint is:
After the completion of either Korriban or Hutta you will be guided towards the Dromund Kaas via the Imperial Fleet. However, once you reach the fleet’s departures lounge you are presented with two options, you can either take a regular shuttle to Dromund Kaas or you can take a route through the Black Talon Flashpoint.

Throughout the Flashpoint you will experience an assortment of group dialogue scenes, all rewarding a scattering of Social Points for everyone involved. Enemies generally present themselves in groups of 3-4 and a few rooms of trash mobs typically leads to a boss. Finally, be sure to complete the Bonus Missions that present themselves to you as these will lead to an additional Bonus Boss.

One big nasty droid, who has a lot of friends. GXR-5 is a relatively simple fight, but for those newer players to the MMO scene it can take a couple of attempts. The tank’s job for this battle is untroublesome, with the boss himself only having one real tactic to deal with, that shouldn’t actually effect the tank. The tank should make the pull and begin building threat while dragging the boss a good distance from his original location. Almost immediately after, the DPS classes should start pounding on GXR-5 and the healer should be keeping everybody topped up in the health department. The fight will play out like a normal ‘tank and spank’ with one differentiation.

GXR-5 will randomly spawn adds that will start at the point GXR-5 originated, target and then chase one member of the team, they wont physically attack but they will explode causing significant AoE damage; when this happens, the Ranged DPS class should bring it down before it reaches the group. The DPS should then start damaging GXR-5 again, with this process being repeated each time an add spawns. If the Ranged DPS class can’t defeat the add before it reaches the group, the tank should react by kiting GXR-5 around the room, allowing some additional time for the Ranged DPS to blast the add away.

Another manageable fight. The tank should make the pull and start building threat on the boss, with the DPS and healer kicking into gear almost immediately after the tank gets aggro. During the battle, Commander Ghulil will spawn floating orbs that do major AoE fire damage, when this happens the tank should move the boss so that the group is out of the range of the AoE damage, repeating the process until Commander Ghulil goes down.

The boss himself does little damage and therefore the healer should have no trouble keeping everyone alive if the orbs aren’t causing damage. Occasionally, you may notice a ring start glowing around your player, if this happens, simply relocate to prevent the incoming damage.

If you have successfully completed all of the Black Talon bonus missions then you will ultimately have to defeat GXR-7. There isn’t actually any tactics to this battle, it is a pure DPS race. The tank should make the pull and position himself with his back up against a wall to reduce the impact of the boss’ knockback ability. GXR-7 outputs a tremendous amount of damage, therefore the healer should keep the tank topped up at all times and it is down to the DPS classes to get him down before he drops the tank.
This boss can drop the following loot:

The final boss in the Black Talon; she is relatively easy but does take some concentration from the entire group. The tank should make the pull and start building threat with the DPS and healer initiating their duties almost immediately. The fight is pretty much a ‘tank and spank’ other than her 2 abilities. The first is more of an annoyance than a concern, where Yadira will randomly leap at a player and then leap back to the tank, dealing a tiny amount of damage which shouldn’t concern the healer too much.

The second of her abilities is her most powerful; every so often Yadira will pull everyone in the group towards her and start building energy, displayed by blue rings swirling around her, when this happens the entire group, including the tank, needs to run out of the range of her coming AoE attack. Once Yadira has launched her powered up AoE attack, the tank should regain aggro and continue with the fight. Repeating this process should lead to a quick slaying of Yadira Ban.
This boss can drop the following loot:

There are two events that happen during your progression through the Black Talon. The first presents you with the option to either kill or let live the Imperial Fleet captain, which awards either +100 Light Side Points or +100 Dark Side Points depending on your decision.

The second event initiates at the end of the Flashpoint, where you are presented with the option to either kill the General for +100 Dark Side Points or capture him as a prisoner of war for +100 Light Side Points.

« Why are MS Mesos so Key in the game?
Lithuanian Forces »