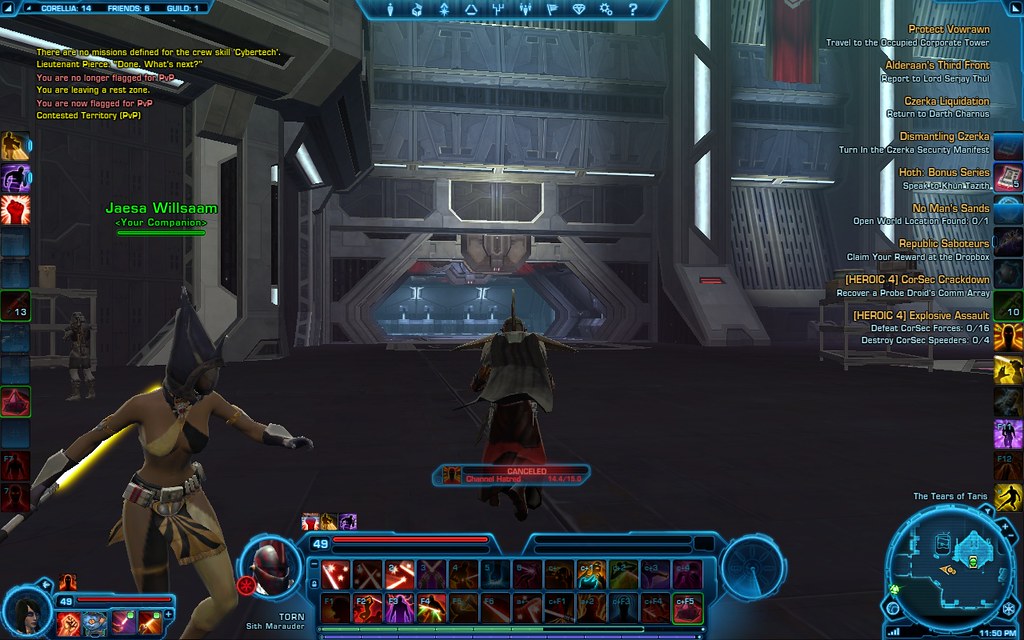 There are many different ways to level your character in Star Wars: The Old Republic, but for those who are struggling or are new to MMOs it can be a boring and drawn out experience. However, for those that understand the leveling process, the journey to 50 is exceedingly more fun and stimulating.

BioWare have spent millions creating a dynamic and exciting leveling experience and you deserve to enjoy it. Therefore I have spent the best part of the week compiling this resource so that you too can shrug the ‘leveling is such a grind’ feeling and start enjoying the game you play.

Think of a sport, like Rugby, Football or anything else physical. If you’re out of shape and start playing with a team, most of the time you’ll be exhausted just wishing the game would end. However, after a while of sticking with it and as your cardio fitness levels increase, the exhausted feeling will wain and you will be able to focus on enjoying the game and perfecting your abilities.

This is exactly the same in an MMO except with one difference, rather than your enjoyment depending on your fitness levels, it depends on your knowledge of the game and of the leveling mechanisms, so that you can turn the so called ‘grind’ into a dynamic and exhilarating experience involving a variety of different scenarios.

Questing is the cornerstone of any MMO leveling experience where typically you are asked to either slay a set number of a specific enemy or are requested to collect an array of items and return to the person who gave you the quest.

Quests are given the name Missions in SWTOR. Nowadays, games as high class as SWTOR give you a much more in depth questing experience, including Bonus and Area missions, mini-bosses and long story-driven quest chains.

Questing is by far the fastest way to level in Star Wars: The Old Republic without a doubt. I have tested them all and nothing can get you more experience points (XP) per hour; with possibly the exception of Grinding, though you’ll soon realise why Grinding is very rarely selected.

The logic behind the popularity of questing is both that each quest is somewhat different and you are continuously exploring the game’s lore. BioWare also understood that the majority of players would quest to 50 and therefore built the entire leveling experience around this, lining all of your Story Quests up with the planetary progression in which questing directs you.

Here are a few tips to help you increase your leveling speed while questing:
Grinding

Grinding can definitely be a great source of fast xp, yet it is the single most mind-numbingly boring way to level in the game. The process of grinding involves finding an area packed full with enemies, roughly 1-2 levels above your current level, and then continuously slaying them until you gain enough experience to level up. Once you increase in level, you find another area with enemies meeting the criteria and rinse, lather and repeat.

My best advise when it comes to grinding is to use it as a way of gaining fast boosts of experience between completing missions by killing enemies en route to the location of the mission’s objectives or by grinding out the remainder of a level after finishing the quests received from a hub.

Here are a few tips to help you increase your leveling speed while grinding:
Flashpoints

Flashpoints are SWTOR’s instanced, scripted areas where you enter with a party of players and work as a team to defeat countless enemies and an assortment of different bosses. The first time you run through a Flashpoint you will likely become hooked; they are extremely fun. However, like anything, needing to run the same Flashpoint repetitively for a long period of time before you reach the entry level of the next available Flashpoint soon kills the joy.

Again due to the fun factor involved and that the loot dropped by the bosses is typically the best gear for your level, I would suggest you pass through each of the Flashpoints you encounter on your adventure to level 50 at least once. Purely leveling by completing Flashpoints is definitely a viable option, though it is neither the fastest or the funnest route and is therefore not advised.
Here are a few tips to help you increase your leveling speed while inside Flashpoints:
PvP

Player Versus Player (PvP) combat is one of the fundamental experiences in Star Wars: The Old Republic and easily the favorite past time of many superb players. In the majority of MMOs, PvP designated events, which BioWare names Warzones, are designed in a way that lower level players get destroyed by higher level players. Whereas in Star Wars: The Old Republic, if your character is below 50 your character is buffed with stat enhancers to allow you to at least stand a viable chance.

Warzones in SWTOR are instanced areas where a set number of players fight on teams in objective based matches. You are not competing against computer scripted opponents inside here, you are fighting against real players! Also, the rewards given to you from a successful Warzone are unexpectedly high, in the form of credits, gear and the almighty xp.

Here are a few tips to help you increase your leveling speed while competing in Warzones.
So now you’ve decided what your objectives are and the method you are going to employ to complete them, I have an assortment of general tips that I use personally to dominate the leveling segment of this game.

« How to Modify Items in SWTOR
The Esseles in SWTOR »