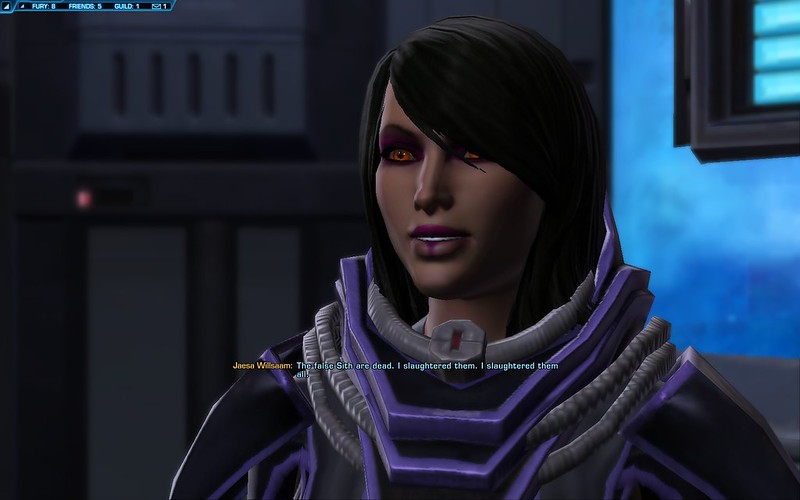 Crew Skills are BioWare’s version of professions and define what items your character can gather or produce during your adventures. The system is less unique than you might expect, though it is tried and tested, and serves excellently inside Star Wars The Old Republic.

During your exhilarating journeys, you will acquire five companions and a ship. This ship will act as your centrum and your five companions will both defend you in battle and help you become stronger and wealthier through their assistance with your Crew Skills. They will be your workforce and you will be their master.
Crew Skills are separated into three categories as follows:
Gathering Skills:
Crafting Skills:
Mission Skills:
Around level 10, after finishing your starting zone, you will arrive on either the Imperial Fleet or the Republic Fleet, depending on your allegiance. Here, you will encounter a variety of Crew Skills Trainers, all wanting to teach you their skills. Firstly, I suggest you speak to every one of them, except don’t accept the Crew Skill, instead, hit escape right at the end of the dialogue scene to cancel it; this will reward you with a small experience gain and a codex entry for each Crew Skill.
SWTOR allows you to obtain a total of 3 Crew Skills, with the only limitation being that you can only ever have 1 Crafting Skill at any time, whereas you can have 3 Gathering Skills, 3 Mission Skills or a mixture, just as long as your combination only includes 1 Crafting Skill.
Typically Crew Skills are carried out by assigning missions to your companions, which will cost a small number of credits to initiate, though it does generally make a profit. After assigning a mission to one of your companions, he/she will go out into the world and complete the mission objectives, returning to you with a reward. The time it takes for a companion to complete a mission depends on two things, the level of the mission and their level of affection. Generally, the longer a mission takes to complete, the higher the chance of receiving a rare item as a reward. Gathering professions differ slightly; you can still send your companions out on missions, though it is also possible for you to gather resources yourself in the world through skill-specific nodes such as Crystal Deposits or Defeated Beast Corpses.
Finally, Crafting skills have one last trick up their sleeve; Augmentation. By definition, to Augment something is to improve it, and that is exactly what this does. While your companions are on missions crafting items for you, either to sell or empower your character, they can occasionally achieve a Critical Success. This causes the item they were creating/modifying to include an Augmentation slot, which can be filled with stat-enhancing items created by Slicers. Also, when you are crafting an item, there is a slight possibility that you might learn how to create a more advanced version of that item.

Archaeology
Archaeology is the study of Crystal Formations and Archaeological Finds. Within these two items, Archaeologists can gather Color Crystals, Power Crystals and Artifact Fragments. Color Crystals and Power Crystals are used in the Crafting Skills: Artifice and Synthweaving, to craft Force-imbued weaponry and Armor.
Bioanalysis
Bioanalysis is the art of collecting and studying the genetic material found within living organisms, plant or beast. Bioanalysts locate Biochemical Compounds and Biochemical Samples, built up of cell fibers, bacterial strains, and medical fluids, among other things. These Compounds and Samples are used by in the Crafting Skill: Biochem, to create Medpacs that regain a portion of your health, Stimulants that temporarily increase your stats and Biological Implants that, when equipped, permanently increase your stats.
Scavenging
Scavenging is the practice of finding Scavenged Metals, Scavenged Compounds and Flux from practically anything technological: defeated droids, broken machinery, immobilized vehicles, junk piles and abandoned cargo. The Metals and Compounds found are used in the Crafting Skills: Armormech, Armstech, and Cybertech, to create armor and weaponry.
Slicing
Slicing is the art of hacking into computer systems and picking locks to acquire rare items and tech schematics. It is also the only gathering skill that does not gather items used in a Crafting Skill. This skill also has the ability to unlock missions for every other Crew Skill and is the only skill that can reward you with Augmentations for items with an Augmentation slot. Due to this, all of the Crew Skills can benefit from Slicing, however, Cybertech is benefitted the most as it can make use of the rare tech schematics.

Armormech
Armormech is the practice of working with metals, alloys and synthetic materials to create Medium and Heavy armor for non-Force wielders. Armormechs can reverse engineer their crafted items and typically fabricates armor holding the following stats: Aim, Cunning and Endurance.
Examples of what Armormech can produce are:
[Energized Eliminator's Chestguard]
[Rakata Supercommando's Belt]
[Energized Enforcer's Boots]
Armstech
Armstech is the art of constructing blasters and modifications from metals, alloys, and synthetic materials. Masters Armstechnicians can craft powerful blades and staves, a weapon set not commonly used in the world of SWTOR due to the ever deadly Lightsaber. Though it is common to see these types of weapons equipped by companions, making this Crew Skill a powerful asset for all classes. Armstechnicians can also reverse engineer their crafted items.
Examples of what Armstech can produce are:
[Rocksteady]
[Advanced Patron Barrel 23]
[The Chopper]
Artifice
Artifice is the extremely precise skill of manufacturing Lightsabers and their advanced accessories, from Focus Crystals and Color Crystals to Generators, Shields and their Hilts. This is an exceptionally popular Crew Skill for Force-wielders in the game, mostly because the Color Crystals are extremely desirable and can be used by any class to modify both the stats and the color of a weapon, therefore making it both a powerful asset and profitable. Artifice can also be used to fabricate Relics, an equipable item for your character. Artificers can also reverse engineer their crafted items.
Examples of what Artifice can produce are:
[Advanced Magenta Resonating Crystal]
[Rakata Relic of the Shrouded Crusader]
[Advanced Dexterous Enhancement 22]
Biochem
Biochem is the practice of converting Biochemical Samples and Compounds into Medpacs, Stimulants, and Implants. This Crew Skill is recommended by many raiders who focus on Operation level content, as the unlimited use of Medpacs and dominating high-level Stims can be the deciding factor in some parties. Biochemists can also reverse engineer their crafted items.
Examples of what Biochem can produce are:
[Rakata Medpac]
[Tionese Field Medic's System]
[Rakata Efficacy Adrenal]
Cybertech
Cybertech is the art of manufacturing mechanical items including Speeders, Gadgets, Grenades and Bombs, Armoring and Droid Parts. Armoring and Modifications can be used to upgrade both weaponry and ships. This coveted Crew Skill is recommended for all players as the Modifications, Armoring, Gadgets, Grenades, Speeders, and Bombs can be used to enhance every class. Cybertechnicians can also reverse engineer their crafted items.
Examples of what Cybertech can produce are:
[Advanced Artful Mod 23]
[Advanced Commando Armoring 23]
[Hotrigged Speederbike]
Synthweaving
Synthweaving is the delicate skill of fabricating synthetic materials out of Crystals and Artifact Fragments to construct armor used by Force-wielders. Armor created by Synthweavers can be Light, Medium or Heavy to accommodate all of the Force-wielding classes in the game. Synthweavers can also reverse engineer their crafted items.
Examples of what Synthweaving can produce are:
[Energized Weaponmaster's Vest]
[Energized War Leader's Body Armor]
[Energized Stalker's Robe]

Diplomacy
Diplomacy is the art of negotiation. You can send your companions into war zones and other conflict locations to initiate or progress negotiations. This Crew Skill rewards Medical Supplies used in Biochem and Companion Gifts used to increase their affection levels. The most unique part of Diplomacy is that its missions also reward Dark or Light side points, allowing you to easily change the behavior of your character.
Investigation
The investigation is the practice of analyzing and decoding classified information. Investigation missions for your companions yield the following rewards: Researched Compounds used in Armstech, Companion Gifts used to raise their affection levels and finally, Prototype Schematics for all Crafting Skills.
Treasure Hunting
Treasure Hunting is the skill of discovering, tracking and claiming lost treasure. The rewards from Treasure Hunting missions are Gemstones used in Artifice, Companion Gifts used to raise their affection levels and Lockboxes that contain items and credits.
Underworld Trading
Underworld Trading is the revered skill of exchanging items on the Galactic Black Market. Underworld Trading missions can yield Underworld Metal used in Armormech and Cybertech, Luxury Fabrics used in Synthweaving, Companion Gifts to raise their affection levels and Schematics.

« The Esseles in SWTOR
PVP like a Pro: Sith Inquisitor/Jedi Consular »