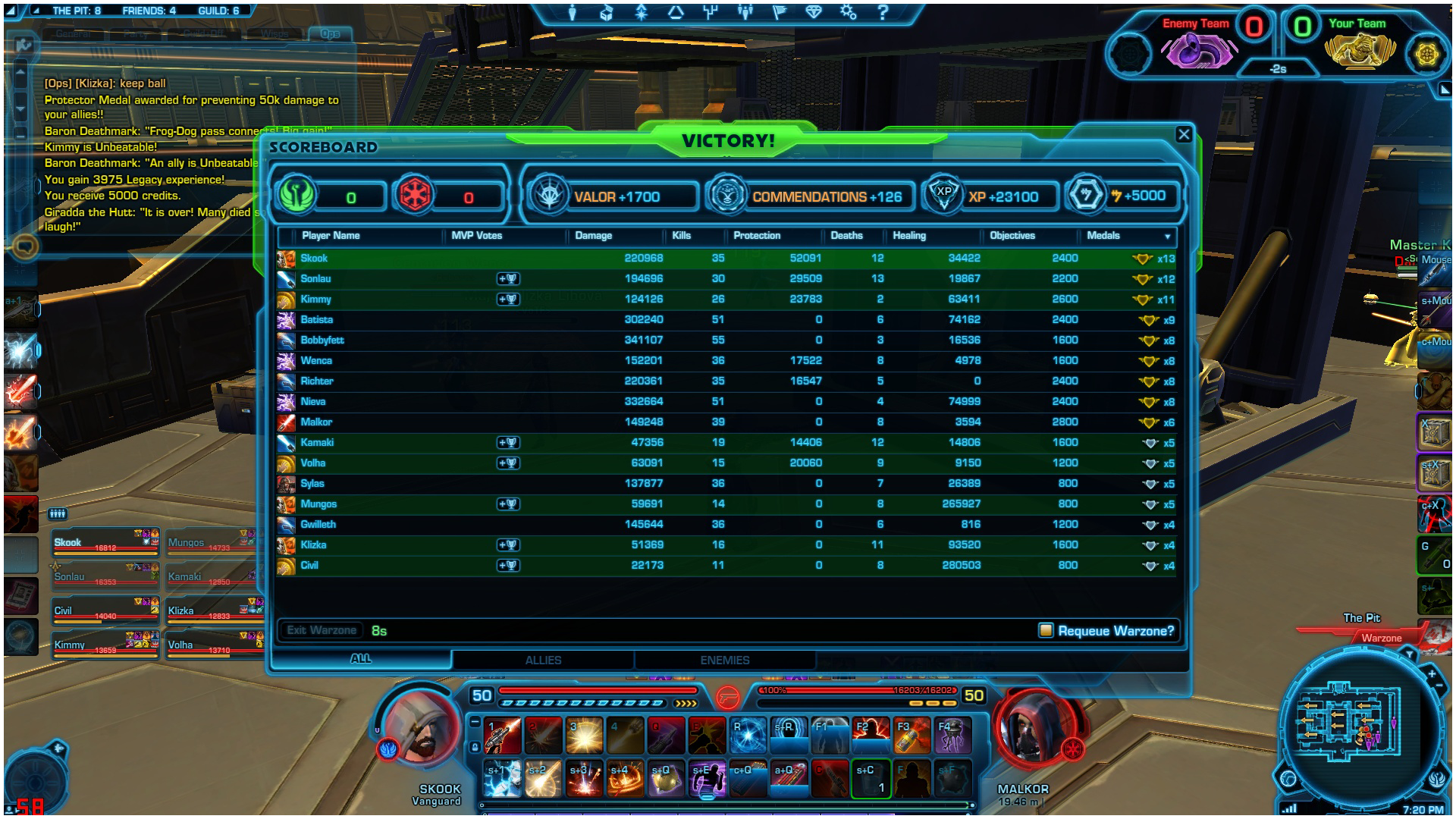 Huttball, a thing of beauty. The only PvP Warzone where the opposing teams can be of the same faction. Huttball takes place in the Pit, a location based on Nar Shaddaa, and plays much like an American Football or Rugby game. The ball spawns in the center of the map and each team battles to it. Each side will continuously fight for possession of the ball so that they can score. In order to score, a player must carry the ball over the opposing team’s goal line on the opposite side of the map. The game concludes when one team reaches 6 points or the 15 minute timer expires. In the event of a tie, after 15 minutes, the last team to score is victorious.

The Pit is laid out in a rectangular shape with each team’s spawn point at opposite longitudinal ends. Just in front of each of these is the team’s goal line and then a large pit. Fixed above the pits are a set of upper and lower scaffolding with 4 flame pits, used to transverse the map. Finally there are 2 Acid pits and 2 Air Lifts forming a square that surrounds the ball spawn point.

The game is overseen by Giradda the Hutt and players either compete as one of the RotWorms (purple) or FrogDogs (gold).

There are two different approaches players can take when they get the ball, they can either pass or run. Running is quite simple and is best done by finding a group of players and preferably a healer, and slowly making your way to the opposing team’s endzone, obliterating everything in your path. On the other hand, players can choose to pass the ball, by throwing it into an area and hoping another player is in position to reclaim it. There are many more advanced strategies, all of which I will cover in this article.

Acid Pits
Between each side’s pit and the ball spawn point is a rectangular shaped, green, acid pit. You really don’t want to get caught in here as it will soon drop your health to zero. Avoid these at all costs, though do happily make use of your knockback abilities to cripple your opponents.
Flame Pits
Like the Acid Pits, these will soon kill you. There are 8 flame pits on the map, 4 on each side, 2 on each side’s upper scaffolding and 2 on each side’s lower scaffolding. The flame pits run on a set timer; try to get a feel for them as they will block your way when trying to score.
Air Lifts
Air Lifts are located to the right and left of the ball spawn point and are used for a means of transportation and escape. When a player stands on one of these lifts they will be blown high into the air, slowly moving in a random direction. The fall from the air lifts will not harm the player.

Speed Boost
The speed boost power-up is located in the center of each team’s pit and allows the bearer to move significantly faster for a short period of time.
Health Pack
The 4 health packs are found in each corner of the map, just past each side’s scaffolding. As you would expect, they restore some of the player’s health.
Power Boost
Power Boosts are centered on the far longitudinal edges of the map and increase the damage and healing a player can exert for a short period of time.

Irrelevant of how many kills you are getting, you can’t win without scoring. Below are a few strategies to make sure your team is holding the trophy when the dust settles:

A good defense is a good offense, and you definitely can’t win if the other team keep scoring. Below are a few tips to make sure your defensive game is helping you succeed:

After hundreds of games of Huttball I have encountered many different scenarios, learning from each defeat and respecting each victory. The following tips include everything I have learned and should help you dominate Huttball:
That’s it, you are now ready to dominate Huttball. If you have any other tips, be sure to mention them in the comments section below.