Most of Oldschool Runescape’s efficient players put lots of hours not only into their main accounts or ironmen, but they also have come up with ways to make money in the background to fund their skilling efforts. The OSRS Rune Dragon Alt is the peak AFK money maker in the game, and while it’s not entirely seamless, it is much better than running several Amthyst mining or Cannonball-making accounts at once.

What is Required to Make a Rune Dragon Alt?

Let’s be frank. Dragon Slayer 2 requires the completion of vast majority of quests in the game, as well as building your melee stats near the maximum so you can put up a fight against Rune dragons. It is highly recommeneded to check out this Google document to see the easiest path to take in terms of questing. Monkey Madness II, and other Master quests are optional.

According to any efficient neck-beard, your stats should ideally be:

Gear is extremely important as you need both optimal defense and accuracy to kill them without having to pay much attention to the screen. The Dragon Hunter Lance is the cornerstone to this account, since it has high stab and a 20% damage + accuracy bonus against dragons.

The standard high-cost template for a Rune Dragon killer:

While it’s not recommeded, you can still use a budget setup for under 20M gold: 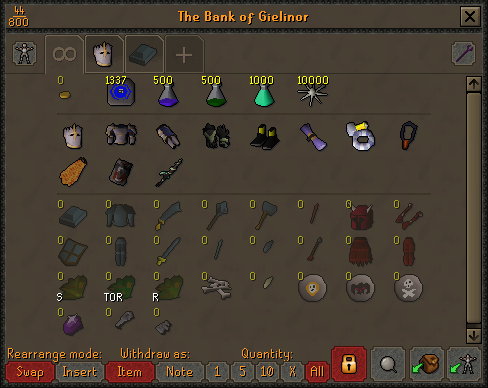 It should be noted that while an Avernic Defender would be slightly better, you will be dependent on Super Extended Anti-fire potions, which has a very short timer compared to regular extended antifires.

Rune Dragons have a very high defence level that only stab weapons can somewhat penetrate. While the Ghrazi rapier has a higher stab bonus over the Dragon Hunter Lance (94 versus 85), the 20% accuracy and damage boost with the Dragonhunter Lance by far make it more effective.

If you were on a Slayer task, then a Ghrazi Rapier or Zamorakian hast should work OK, but the lance would still be recommended as the bonus stacks with the Slayer Helmet’s damage bonus.

What can Rune Dragons Drop?

Rune dragons don’t have an exciting drop table, but they are quite consistant and profit can more or less be predictable. You will always get a Rune Bar, which makes for a base drop of 12,000 gold (market price may vary by the time you read this guide), and the drops can be between 30,000 to 40,000 on average. The 1M gold per hour is assumed you have bad luck, but some have reported getting around 1.5 million per hour.

Some rare drops you can look forward to include:

If you basically play OSRS as your full time job, it’s worth putting hundreds of hours in to make big fat stacks while hopefully doing something else productive. This account also doubles as an efficient Vorkath killer, as melee + the dragon lance is the fastest way to kill it, netting you around 4M gold per hour. Othewise, you may consider making a more simplistic alt accounts, such as an Amethyst miner, a fishing alt, or smithing alt.