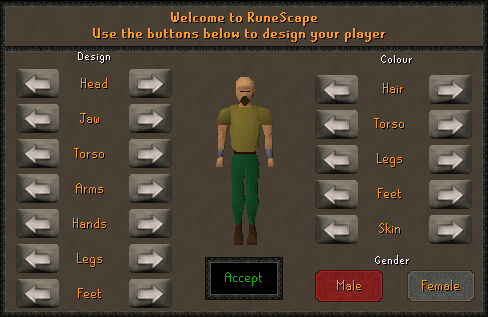 Oldschool Runescape (OSRS) is a sandbox MMORPG that is quite different than most games you’ve played. Unlike World of Warcraft or standard RPG games, there is no linear path to take when it comes to leveling, questing, and obtaining gear.

This game is indeed a grind fest, although if you can find the beauty of its simplicity, it’s quite an addictive game that players stick with for years.

In this guide, I will give you some general advice on how you should plan out your account for the starting stages of building your character.

Note: The advice given in this article is for non-Ironman accounts, which is preferable if you have zero experience in the game.

Oldschool Runescape is a free-trade economy and had always been so since it’s inception. The re-introduction to the Grand Exchange had made it even more convenient to buy & sell items, and price fluctuations are based on player demand. The vast majority of gear upgrades, trade skill items, and cosmetics are tradeable between players.

For a new player, most of the high-priced items should be ignored and you should be pragmatic about buying what you need.

A decent goal to shoot for in your first week:

If you plan on sticking to free to play, the items above are the meta for what you need until you decide to move onto members or stick with high-level training in free servers. To skip the tedium of money-making, you may simply purchase OSRS Gold, but that is up to you.

Some recommended methods to get your starter gold include:

When you collect items from these example methods, you will then put them as orders on the grand exchange and wait for them to sell. Sometimes, price fluctuations may cause items to sit longer than usual, but it’s always best to hold out on the price so you don’t contribute to an item crashing.

There is also the method of flipping items, which is the idea of taking items with a lower value and selling them at a slightly higher price. While you usually need large stacks of gold for such methods, you could simply buy items from shops to resell on the exchange if the price discrepancy is high enough.

Getting Started with Combat

Melee training is the bread & butter of this game, and is typically the cheapest form of combat. Your attack level determines accuracy, strength levels calculate your max hit, and defense level is your ability to mitigate damage. The three combined will raise your combat level (along with prater) and allow for quicker experience rates and gear unlocks as you advance.

One tip as you are starting out is the Event RPG is the best weapon to use, even if it looks quite silly. You can buy it from Diango for 250 coins, and it is wieldable with just 1 Attack.

Train up your stats on low-defense monsters, which may include: cows, chickens, seagulls, or monks. Once you get to base 40 stats, you can equip Full Runite armor and start training on better monsters, like Flesh Crawlers or Moss Giants.

Ranged training allows you to use ranged weapons like the bow & arrows, crossbows, and throwable items. You start out with a normal bow and bronze arrows, and as you level up, Oak, Willow, and Maple bows become available.

Since ranged weapons are physical damage, you will want to stick to low-defense monsters when training the preliminary levels. Once you get to a higher level, you may hide behind objects to avoid damage and kill monsters like Greater Demons or Ogresses to make money.

Magic training is quite different from ranged and melee training, and usually ends up being more expensive. There is a base amount of experience given for every combat spell, even if you splash or hit a zero. This is why lazy players choose to “splash train” on rats to gain AFK magic experience while being quite inefficient.

A recommended path for a fresh account would be to train airstrike on low-level creatures, like cows, until 13 magic. From there, you can safe-spot Ogresses in the Corsair Caves with fire strike to make a profit from the runes that you buy. You can do this until around 55-60 magic, in which faster methods would be unlocked.

There are 144 quests in OSRS, and all of them are technically optional. In the free version of the game, quests are rather lackluster compared to the Members content but are still worth it to unlock the Dragon Slayer quest.

Quests have the benefit of giving experience and allows you to skip low-level grinds in some cases. For example, Doric’s quest will get you to Level 10 Mining by simpling giving him his list of ores. Complete the Knight’s Sword quest to jump past Level 30 Smithing to avoid buying lots of ores & bars.

Is it time to upgrade to Members?

While you can purchase members with your credit card, the most preferable way to do so is via in-game gold with Oldschool Bonds. Bonds is a relatively recent concept in which players can sell them to other players for gold, and then they can unlock Members-only content.

If you need help scrounging up the last bit of gold to buy one of these bonds, simply buy RS gold to skip that extra grind. If not, making money in the free version of the game is quite slow and may take weeks for some people.